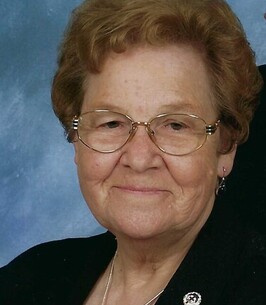 Lucille E. Salhoff (Torrey), 88, of Fredonia, N.Y., died Saturday February 6, 2021 at the Heritage Green Rehabilitation & Skilled Nursing Facility in Greenhurst, N.Y.
Lucille was born September 25, 1932 in Fredonia to Harley and Alvira Torrey. She married Harvey Salhoff August 22, 1959. The couple had been married 48 years at the time of Harvey’s death on April 10, 2007. Lucille had a long and successful career in food service where she worked for 3 different area school districts. Lucille began her career in food service in 1968 at the Fredonia Central School District as a line server, cashier, food preparer and dishwasher in the school cafeteria. In 1974, then employed by Interstate United Corporation, a company that runs food service operations for school districts and other institutions, Lucille was promoted to cook’s assistant at Fredonia Central. In 1978 she was transferred by Interstate United Corporation to the Brocton Central School District where she was promoted to the manager of the school lunch program. Forestville School Central School District hired Lucille in 1984 as a cook-manager where she took over a struggling lunch program and was able to make it a financially successful endeavor. She retired from Forestville Central July 17, 1996.

Lucille was a member of the Laona United Methodist Church and involved with the United Methodist Women’s group. She was a great cook, loved music, singing and square dancing with her friends.

Besides her parents, Harley and Alvira Torrey and her husband Harvey, Lucille is predeceased by her 5 siblings,

A memorial celebration of life will be held in early summer. Interment will be in the Laona Cemetery. Memorial contributions in Lucille’s memory may be made to the Laona United Methodist Church, 9636 Wilson Rd. Fredonia, NY 14063. On-line condolences may be made at larsontimkofuneralhome.com. Arrangements by David J. Dengler, LARSON-TIMKO Funeral Home, 716-679-9000.