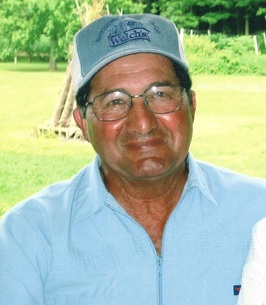 Throughout his life, Sam was an avid athlete and sports enthusiast. During his High School years, Sam ran track, cross country and played football and baseball. During those years he was also a member of the Laona Tech basketball team. Sam was a passionate golfer and golfed for many years at Hillview Golf Course. He was a charter member of Art Asquith’s Chautauqua County Senior tour. Sam was also an enthusiastic baseball and softball player. While in the Navy, he played baseball while stationed in Guantanamo Bay and continued to play upon his return to the Dunkirk/ Fredonia area. He also played fast pitch, slow pitch and modified softball in multiple leagues well into his 60’s.

Sam and his late brother, John, owned and operated Conti Brother’s Back Acre farms in Laona when they took over the family farm from their parents Ross and Louise in 1958.

Sam loved to laugh, and he did it often. All of his grandchildren were very active in sports and music and he and his wife, Pat, could always be seen at their concerts and events. Along with his grandchildren, his greatest joy was spending time at athletic competitions and practices. It didn’t matter which sport it was, Sam would be there, usually with some or all of his children in tow. Although he rarely missed any track and cross country meets, basketball, soccer, baseball and football games that Fredonia was playing in, Sam could ALWAYS be spotted at wrestling matches and tournaments everywhere across the state. Since the beginning of the Fredonia wrestling team 50 years ago, if there was a match or tournament, Sam would be there taking videos for coaches and wrestlers to view. He often got so excited while filming that he ended up with more pictures of the ceiling than of the actual match taking place. He was awarded the first annual Southern Tier Wrestling Officials wrestling Booster award in 1998.

Sam is also survived by his sister Annette DeCosta of Fredonia, and sister-in-law Elaine Conti and many, MANY nieces and nephews from all across the country. Along with his parents, Sam was preceded in death by his brothers and sisters-in-law Dr. Louis and Marian Conti, John and Hazel Conti and Ross and Gerry Conti all of Fredonia; his sisters and brothers-in-law Nina and Carl Cash, Martha and Jack Smith, Dorothy and Angelo Bova and brother-in-law and best friend Vince DeCosta. Also preceded in death by brothers-in-law and sisters-in-law Robert and Betty Posch, Doris and Walter Neely and John “Buddy” Posch.

Memorial contributions in Mr. Conti’s memory may be made to the SonShine Charitable Fund, sonshinefund.com, in honor and memory of his youngest son, Christopher I. The SonShine Charitable Fund is a 501(c)(3) charity helping to defray the cost of funeral expenses to families who lose a young child. Or contributions can be made to the Laona United Methodist Church Outreach Committee, Porter-Wilson Road, Fredonia NY 14063

A Celebration of Life in honor of SAM CONTI, SR.
will be held Saturday July 3, 2021 from 1-4 pm
at the family residence, 3692 Rt. 83, Fredonia.
Drop in anytime. Remembrances will shared at
2 pm. Everyone is welcomed. In the event of
rain, the celebration will be held at the Laona
EUMC, 9636 Wilson Rd. Fredonia. Arrangements
LARSON-TIMKO Funeral Home.